Sustainability and Fair Labor in the Outdoor Industry [EP 344]

This week on The Outdoor Biz Podcast we have a repeat guest, we first heard from Ammi Borenstein from Snaplinc Consulting back in 2019 talking about sustainability activities in outdoor product production. Ammi and I spoke a few weeks ago and there have been quite a few changes in those 3 years so . . . he’s back! 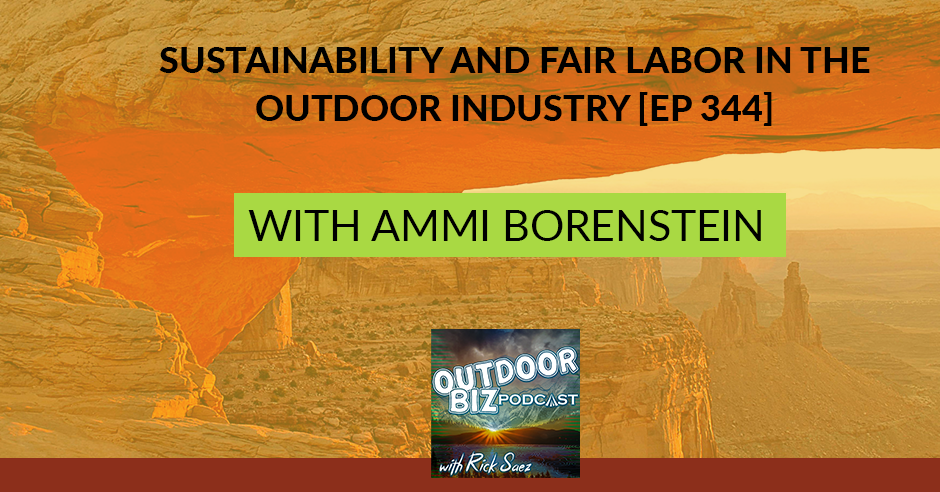 How is your business, Snaplinc Consulting Doing?

We’re growing quite a bit. So, it’s gone from just me last time we spoke to now three of us. And then we’ve also developed a pretty good partner network. So, not only do we offer our core services, but when we have to reach beyond what we can do we have that capability. And we’ve really expanded the range of services and certifications that we support. We’ve expanded industries. Oh, really? Good for you. And it’s been great, we’ve expanded the types of products and scope of products. So Outdoor still makes up the core of what we do, which you know, really is why we do this based on my background. But outdoor apparel is really our core, but we’re now doing outdoor and broad market hard goods. We’ve had good occasions to work with material suppliers on sustainability, and we’ve actually done some work with a lingerie company and a children’s apparel company, so it really has broadened out quite a bit

What’s going on in the outdoor industry related to sustainability?

We’ve come a long way in a short time as an industry. I think for probably, you know, 25 or so years, we’ve been talking about it as an industry, but I think in the last three to five years, we’ve really activated. And I would say really woken up to the long arc of impact that we have as an industry. And when we think about it and look at it, we really look at the supply chain on one end of the arc, the branded in-house activity is kind of in the middle, and then really what goes on once it leaves everybody’s warehouse. And we think on both of those ends in particular. I mean, there’s really still a lot of work to do on the social and fair labor side of manufacturing. And also there’s a lot of work to do on the diversity, equity, and inclusion side of our consumer base. So we think a lot about people on the ends, but we also think about the environmental impacts. Things like water or chemicals that may end up in those manufacturing communities, or end-of-life issues, products that might break down in the communities abuse. And so, I think as an industry, we moved away from zooming in on just what we do in-house, and we’ve really zoomed out and gotten more accepting and aware of that long arc of impact that we do have. So that’s been a really positive change.

Once the product is out there in the consumer’s hands, or maybe it’s on the retailer’s shelf, that life cycle from the time it gets bought to the time the consumer decides it’s done. How does that impact sustainability?

I think the best way to think of that is the more times you use the product, the lower, the impact or use and the longer it then is until you buy the next one. I think we’re also seeing as an industry, more focus on things like rentals. To try to extend the life or extend the number of uses. Things like care and repair, right? I mean, if you can retreat the repellency if you can fix a tear, it just gets the product back out there for a few more uses and that’s really the goal.

How about the current state of sustainability in some of these related industries that you mentioned? Are they as far along or further along than the outdoor industry?

So I think unfortunately maybe yes and no. So many companies, many of the larger broad line apparel companies have worked to reduce their impact per product. But the issue is I think as we all know is just massive overproduction and overconsumption. So it doesn’t really matter if you take the impact of a given product down by 10%, if you’re selling 20% more. Right. I mean, the impact is growing. And ultimately what we have to do is we have to reduce overall impact. So I think a lot of those big companies can fund a lot of initiatives that do help reduce impact.

What’s next? Where do we go from here?

I think that the pursuit of digging deeper into upstream supply chain impacts is going to keep happening. I think long ago we classify supply chain sort of starting from the brand level and working out and we call the closest layer to us tier one. So tier one are generally those cut and sew factories, tier two raw material suppliers, all the way to tier four, which is harvesting cotton, for example. So we have seen as an industry that we have evaluated and have looked very carefully and very thoroughly into, in many cases into tier one into the cut and sew facilities and what we’ve discovered is that actually our biggest impacts happen upstream from there. More in the tier two and tier three zone. So, where we see things going already is people digging deeper and investigating much more thoroughly into their tier two impacts their raw material suppliers, and the tier three impacts. So some of the chemistry and the raw material inputs because we know that’s what’s happening. And that’s uncovering things like much greater water impacts than I think we really understood just a short time ago. And those water impacts are in communities that can least afford it. So we’re discovering some of those social impacts as tied to sustainability, chemical impacts, et cetera. So that’s on one end, I think on the other end, we’re really thinking hard about end-of-life. We’ve all heard about microplastics. We all know that the average nylon or polyester outdoor garment, whether shell or base layer or anything in between is gonna be with us longer than we’re gonna be around. So I think there’s much more careful thought, given both at the brand level and the consumer level to end of life. I don’t think anybody’s really cracked that code yet, but trying.

PrevPrevious EpisodeMarine Biologist Chris Paparo shares his passion for Coastal Ecology, Photography and his wild explorations around Long Island, NY [EP 343]
Next EpisodeClimbing, Podcasting, and Inspiration with Steven Dimmitt from The Nugget Climbing Podcast [EP 345]Next