This week’s inspiring conversation features WANDRD Co-Founder Ryan Cope. Ryan talks about growing up all over the world, how the idea for WANDRD formed around their kitchen table and launching with Kickstarter. 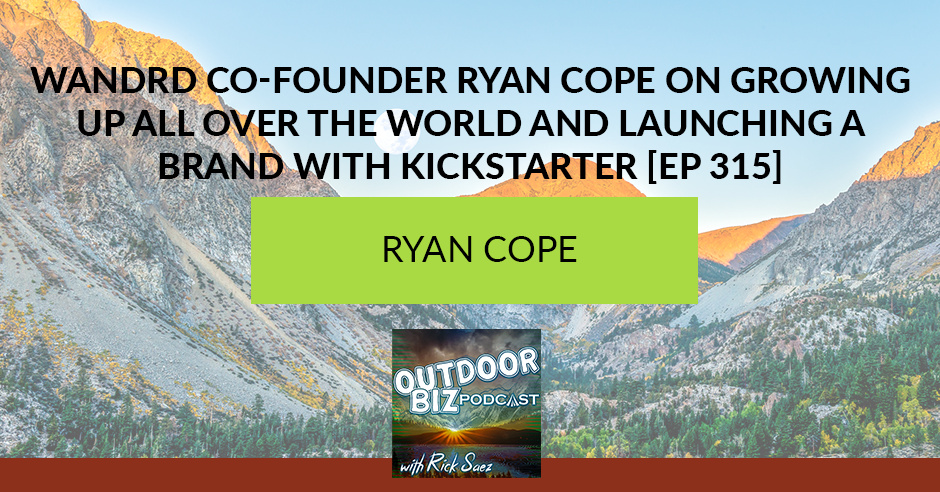 We grew up all over the world and traveled quite a bit. One of the first big trips I remember was when I was in the third grade, my parents bought a motor home. We live in Utah, grew up in Utah and we took the motor home for a two-month trip down the Baja peninsula.

They checked us out of school. We did all the homework from the motor home and everything. And that was just a really cool experience to get to do that with the family and to spend that time together at such a young age. And then from there, we just, what seems like every year had a couple of big trips where we’d pick a new destination and go check it out. 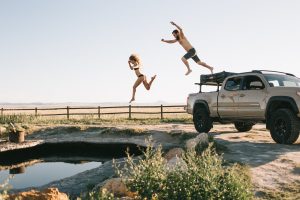 How’d you get into Photography?

Well, it seems like it goes hand in hand with the outdoors and with travel, right? Like you’re getting out, you’re seeing these amazing things experiencing all these cool places. And so it’s natural to want to start to capture those things and I just started picking up a camera and decided I wanted to get more into figuring out how to capture those amazing places.

My first camera was a digital camera. My brother Spencer, it was fun to come up with this bag brand together cause he shoots more film and I shot more digital. And so it came with it from two different perspectives.

You guys say the idea came from your kitchen table. What were some of the features and aesthetics missing from most camera bags that you wanted to fix?

I think one of the big ones for us was style and aesthetics, most camera bags that we found and were looking at just screamed camera bag. And not only was it the look and the style of it, but it also as a traveler it kind of puts a target on your back for theft and for people that are looking to snag an expensive piece of equipment. So that was a big one, but then also finding this aesthetic and style that we liked, and putting together features that we liked from different bags that we didn’t necessarily find in one bundle. Whether it was weatherproof materials or really durable, or this expandable space so you could carry more gear when you need it and less when you don’t, as well as easy access into the bag. So there were all these features that we were able to comprise into a package that we felt also looked really good.

Were you, were you guys designers or did you hire a designer?

No, it was a lot of trial and error at first. We had a vision for what we wanted and neither of us were designers, though we were both creatives, and immediately went to the drawing board and put down on paper the things that we liked. And on that first bag, we ended up hiring a designer to help us put our ideas into tech packets that we could send to a factory. And then from there started getting iterations of the bag and making tweaks and changes. 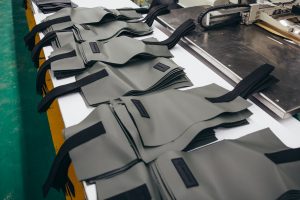 Tell us about your Kickstarter experience. What was that like?

As we were starting off with very little funds between us, we felt like crowdfunding was the easy, natural route. I don’t know if easy, but a clear path to go. To try to get some funds to place our first order, but also test the idea that we had. Ultimately, it was a really great experience for us. We had some other brands that we were friends with and used the Kickstarter process and we were able to sit down, interview them and figure out best practices, and then ended up throwing a little party for our brand and our parents’ backyard, inviting all of our friends and family to launch the Kickstarter.

So tell us a little bit about WANDRD?

Photo Bags were the main idea that we came up with as we were both looking for camera bags. Although all of the products that we make are also built with the functionality so that they can be like a photo bag or not. So also actually great, cool travel bags for everyday use. Whether you’re a photographer or not. And it’s been fun to explore both the photography and then just the travel and everyday uses.

But the first bag that we came up with was the PRVKE pack and that’s still our number one seller. And we are on the third iteration of it since that first Kickstarter campaign and it won camera bag of the year award and some other great accolades.

At what point did you realize you’re onto something here?

I think it was that first Kickstarter campaign. We did over a hundred thousand dollars on the campaign and at the time of that was just a ton of money to us. And it felt like beyond the money, just cool validation that like, Hey, we’re not the only ones that want this bag. All of these people have put their money in to say that they’re interested in it. they want something like this and felt like we could make it happen.

Are there any other new things coming up, new projects, or products you’re working on you can talk about?

I think that our next product launch on our website was actually a Kickstarter that was live this year. And then we’ve had to push it back just a little bit on the actual launch because of the supply chain issues with COVID and everything else that most business owners are experiencing right now.

But we’re really excited about it because it’s a slingback. And so it’s a sling-style bag for camera gear or not, that also integrates with a laptop. And so we’re excited about it. Because most sling bags have the limitation that you can’t carry your laptop or a bigger laptop, like a 16 inch or 17-inch laptop with you and this has a really cool sleeve that the laptop case slips into. Hard to explain over words, but a really cool system to carry more minimal gear along with a larger laptop.

You guys have a special offer for listeners that they can take advantage of and buy themselves a new camera bag right?

Yeah, we do. We’re going to do a 10% off discount code for podcast listeners and it’s OUTDOORBIZ10. Just go to the website wandrd.com  and that code will get you 10% off your purchase.

PrevPrevious EpisodeDkota’s Rob Rosenblum tells us about their unwavering retailer support and commitment to premium and durable apparel. [EP 314]
Next EpisodeRevolutionizing the Merino Wool Industry with Andy Wynne from Nuyarn Merino [EP 316]Next