This week on this replay of Episode 336 of The Outdoor Biz Podcast. I’m thrilled to catch up with Rob Holmes. Rob is the founder of GLP Films, and their mission is to help brands reach sustainability goals, and protect nature, communities, culture, and heritage through the lens of storytelling and content marketing. 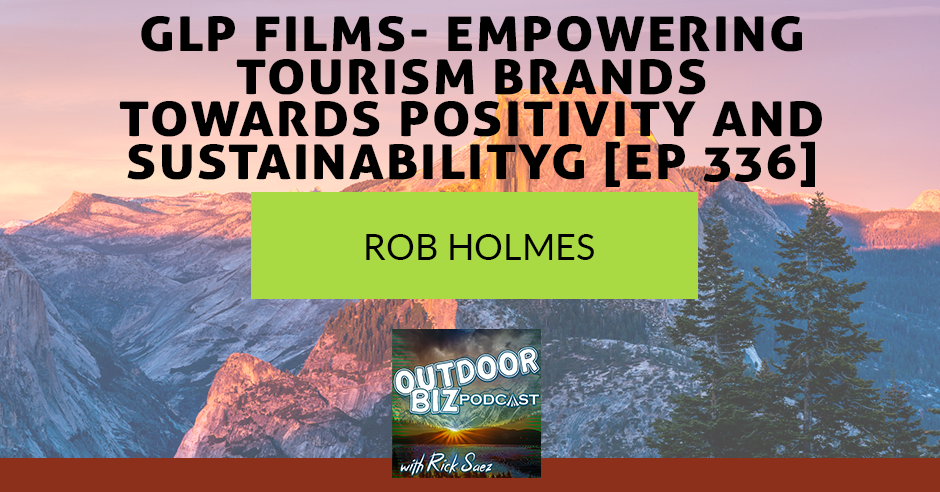 visit rick saez dot com slash tee public and find something to add to your tee collection today, I know you have one.

Go to https://ricksaez.com/teepublic and grab one of our new Outdoor Biz Tees below. More colors are available and more designs coming soon! 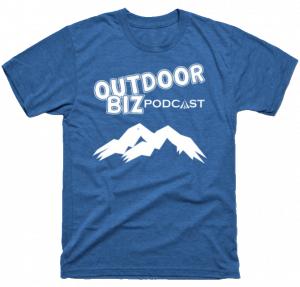 How Rob was introduced to the Outdoors

My real connection with the outdoors started with my dad and going out on these crazy adventures with him and my two older brothers. The funny thing is my dad was a Southern boy. He’s from Tennessee. He knew absolutely nothing about the outdoors. I mean, I, I don’t know if he knew anything but someone helped him get the equipment and things that we needed, external backpacks and all that stuff from back then. Honestly, that really, if I had to celebrate my real connection to it. He had two weeks of vacation every year and those would be dedicated to taking his three crazy sons out.

When he picked up his first camera

I had a Pentax K 2000, so if that doesn’t date me, I don’t know what does. But my getting into photography, was really just my passion thing. It hit me really, I think in college, when, you’re exposed to a lot of courses. I went to a small liberal arts college in upstate New York, Hobart College. And I majored in environmental studies, and wildlife management. So sort of this odd combination I had to petition the school cause they had nothing around wildlife. I took one photography class and you take that black-and-white photography class everybody takes to get your entry-level photo class. I got, I think a B, but I remember that I didn’t like any of the history stuff. I just wanted to shoot the camera. That’s all I wanted to do.

The start of GLP Film

I pretty much was doing freelance. I did some independent projects with organizations, some nonprofits out of Seattle, one in particular called the Tibetan Nuns Project. It was a small NGO. They had a project on the Tibetan side of India. So I went there for three consecutive years just to shoot their calendar. They had an annual calendar, but that was one example of a project. But more importantly, I did a lot of solo work. When I was in Seattle, I went to grad school. At the University of Washington, I actually got into the business. So I got an MBA, which again, that was the last thing I thought I’d ever get, but I got an MBA and, after school, I started with a company, in the digital content space, in the outdoor industry.

The inspiration for GLP Films

I had these three different sorts of stools and the legs of the stool that I like to look at.

One was this real passion for conservation. I had a real passion for the outdoors. I worked for the Appalachian Mountain Club for five years. Worked for nonprofits like The Nature Conservancy. So I had a real interest in and passion and conservation. That was one stool. I think the other was obviously media, I started in photography and got into video. I think on the video side, the turning point for me was Al Gore’s Inconvenient Truth. Seeing that in 2006, I think it was the number-one at that time documentary film of all time. And if you can take a slideshow and make it the highest-grossing documentary film, there’s something there. And, it really was just the power of video.

And, and it really was just the power of video. And I saw that and I used it to go to the Seattle International Film Festival every year. And I would go to all the documentary films on international. I would just go myself, sit in the back row, buy all these random tickets, looking for the most far-flung countries in the world. So I got really into documentaries. So that was the second leg.

And then the third leg was business. That entrepreneurship bug hit me as a young kid. And I ended up getting a graduate degree. I studied in India and South Africa and Brazil while going to business school. And so I for me I wanna combine these three components.

Rob’s advice for folks that want to get into photography or shoot films?

I will say though, in hindsight, because I do know a lot of very successful photographers is . . . the classic . . . focus on what you do. Find your niche and become the absolute best in what you do. Just make sure that you love what you’re doing. Because at the end you’re gonna work more as an entrepreneur or small business. You’re gonna have to be a go-getter. And, it’s tough to have that energy if you don’t like what you’re doing. So just make sure that you focus on whatever your niche is and your specialty.

And become the absolute best, just make sure you love it. And then I think the other point though, is network network network, really leverage your local regional, national, global audience because that really is going to be the key to how you get your content out there, your work out there, your expertise out there for others to pick you up.

My big thing is getting outdoors. So, I run and have Qualified for Boston twice. So I’m a big runner. I love to bike, I’m in Kennebunkport, Maine. So, I’m right along the coast, I feel very, very lucky where we are. And so I’m running, biking, walking, every day.

Magazines- I’ve always been a fan of Outside.

GLP Films has just launched its ” sustainability storytelling competition” It’s a global competition open to all industries, not just tourism. It could be the food industry, could be diversity, conservation, wildlife, tourism, all different sectors. There are six different categories that people can submit under. It’s open to organizations, small, large, nonprofit, and bigger organizations. You can submit as many times as you want.

And the cool thing is . . . for the grand prize winner, GLP will come and film your story on location!

PrevPrevious EpisodeReplay-The value of Wilderness and Saving the Yellowstone Grizzly with Doug Peacock [EP 361]
Next EpisodeExploring the intersection of outdoor recreation, conservation, and the economy with Matador’s Tim Wenger [EP 363]Next