Outdoor Journalist Rob Annis tells us what it’s like to write for a living and offers up some great stories and tips. [EP 342]

Rick Saez
Outdoor Journalist Rob Annis tells us what it’s like to write for a living and offers up some great stories and tips. [EP 342]

This week I’m talking with Outdoor Journalist and OWAA member Rob Annis. I met Rob in Casper, Wyoming at the Outdoor Writers Association of America conference. In this episode, Rob tells us what it’s like to write for a living. We talk about the travel, the clients, and deadlines, and he shares a great tip about getting new content ideas sitting at a bar with a road atlas open! 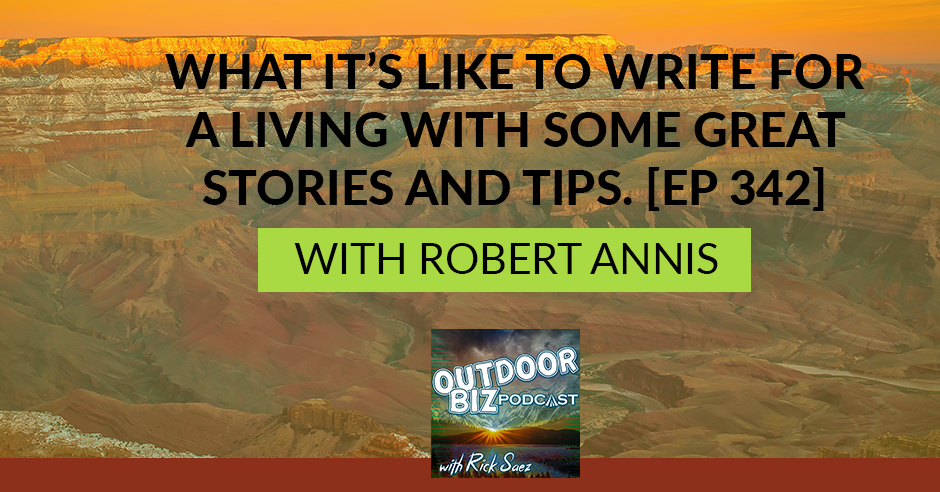 I grew up in rural Indiana, so I grew up going out into the woods and riding my bike everywhere. That was also I’m of the age where we could actually do that as kids. You know, I would get up in the morning, get on my bike, and then my parents wouldn’t see me until, like 6, 7, or 8 o’clock at night.

So I did that for years. I drifted away from the outdoors for a bit when I was in college and after college, I moved to New York for a bit, but once I got back to Indiana and my roots I just started getting back into the outdoors and that’s been 20 plus years now.

How did become a journalist?

When I joked about not having the skills to do anything else that’s pretty much on the money so yeah, I’ve always had somewhat of a talent for writing. At least I hope so. I’m sure there are some editors out there who would dispute that.

I wrote for my high school paper. I wrote a little bit for my college newspaper. And then once I graduated I looked for a writing gig and that’s why I moved to New York. And then not too long after I moved back, I got a job as a writer for the Indianapolis star. And I did that for the better part of a decade.

– When did you get into cycling?

It’s one of the things where. I always loved biking. My parents didn’t want to drive me around so if I wanted to go somewhere I either walked or rode my bike. And then once I started getting back into the outdoors I started out as a really bad triathlete and then I decided at some point I was gonna drown in the water or boredom from running, so I decided to stick with cycling.

– What inspired the van life lifestyle?

I got a van before the whole hashtag van life took off. And I’m really lucky that my wife, I told her that, you know, because I do a lot of camping and outdoor work, I think it’s time for me to get a van and she agreed with me wholehearted, and she was surprised that it took me that long to bring it up. And then I happened to get really lucky someone posted their van on a message board, not too far from where I live. And I ended up buying that Six or seven years ago. And since then I’ve taken my van pretty much to all corners of the country.

– Your writing is great and covers a wide variety of topics, is there one or two you enjoy the most?

It’s one of those things that I’m really lucky that I have a bunch of different interests and I’m able to write about nearly all of them.

– Do you have any projects in the queue you can talk about?

– How did you connect with the Outdoor Writers Association?

I’ve been a member. Oh, six, seven years maybe. It seems like forever cause it’s one of those, it’s one of those groups where everyone is so nice. You have such great relationships with so many people. I was a member for a year and I felt that almost everyone was like a childhood friend.

– What outdoor activities DON’T you participate in?

– Do you have any suggestions and/or advice for folks wanting to get into journalism?

If it’s something that you want to do and you love it and you can’t imagine not being able to do it then yeah, it’s definitely the career for you. And as far as advice, I would give to someone who is interested in doing this, take lots of notes. Never say no

when someone asks you to go on an adventure. And whenever you get to a new place always go to the diviest bar you can find, and put a Road Atlas on the bar and just wait for people to come up to talk to you.

– What is your favorite outdoor gear purchase under $100

– How about some of your favorite books?

Travels with Charlie by John Steinbeck