Long time friend and colleague Chad Kelly joins me on the podcast this week. Brought to you this month by SmugMug.

Chad began his outdoor career in retail then joined Mike and Sue Sullivan and the Sullivan agency as a rep with brands like Eagle Creek and Ex Officio, and now is the President at eVent Fabrics. 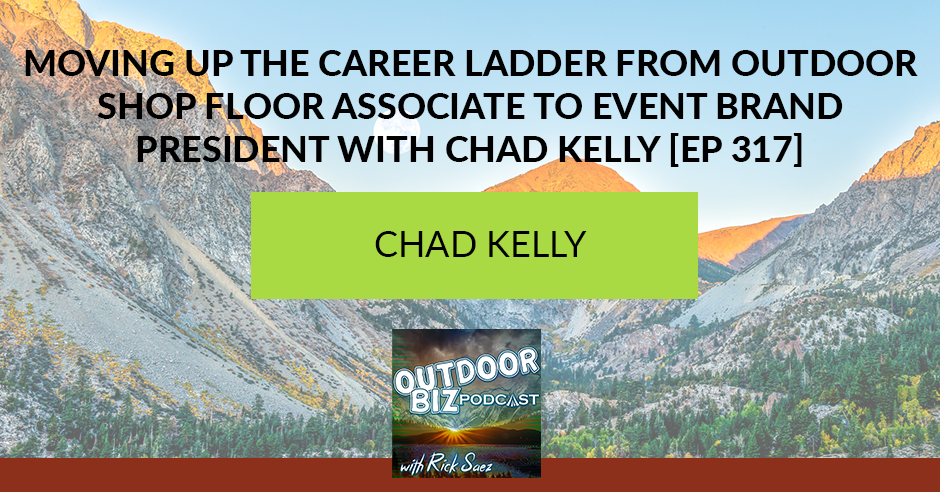 I like a lot of folks our age, we spent a lot of time outside. So I can’t really remember my first experience, but I do have a fond memory, which probably launched me into this industry.

I was on a ski trip with my parents, we were in Breckenridge. This is back when Breckenridge was one street, not a little metropolis. But I remember I took my dad up on, there’s one bowl there. I think it’s on PK and it was steep and probably above our level, but I have a fond memory of skiing that thing with my dad. I got a lot out of it, the adrenaline part. It kinda juiced me up for skiing, but that’s probably my strongest memory of being outdoors.

How did you get into the Outdoor Industry?

I was studying that kind of political science thing. And through college, I was an intern in DC. So I was on this political path when I left college. And then I drove a guy around the state of Kansas who was running for governor.

So it was just him and I, so it was a good experience. I thought it was on the right path. And as life turns out that path after he was elected, fizzled out. And I ended up looking for, looking for a job and ended up at an outdoor store in Kansas City and it was a store called the Alpine hut, which is no longer around, but it was a pretty strong, pretty good store in the Midwest.

How’d you get involved with eVent?

So my territory with the Sullivan agency, I started out in the central south, so it was like Texas and Louisiana. That’s where the spot was open. And then as my family grew, I’m from the Kansas City area, the person left in the north. Mike and Sue Sullivan let me move back up to Kansas city and cover the north side of the territory. So did that for a short time and then. I know some other folks in town that were already involved in the address industry in some way.

Some guys started teasing me with this idea, this new waterproof, breathable material that was air permeable. I’m sure the folks in the industry who are involved in this kind of thing, know what I’m talking about. But at the time, the waterproof product was waterproofing. But you put it on and you always get we always complained about the jackets, you’d get hot and sweaty.

So these guys had a pretty novel approach to that. They created this unique membrane that air can pass through and it’s still waterproof. And so that caught my eye and I thought, oh, this is early days on this thing. I could jump into something. maybe a little risky, cause it really was barely off the ground and I was . . .  Right place, right time. I was pulled in to be their first sales guy.

What’s Your Favorite Piece of Outdoor Gear under $100?

Maybe two things come to mind. I’m still a sucker for wool socks. I was part of the SmartWool rep team, which was one of our lines when Smartwool is just being launched. And I became addicted to merino wool socks.