This week I’m thrilled to be speaking with another Outdoor Writers Association of America member Chris Paparo. Born and raised on Long Island Chris has been exploring the wilds of the Island for over 30 years. As the owner of Fish Guy Photos, he’s a Wildlife Photographer, Writer, Lecturer, member of OWAA  and New York State Outdoor Writers, and currently manages the Marine Sciences Center at the Southampton campus of Stony Brook University 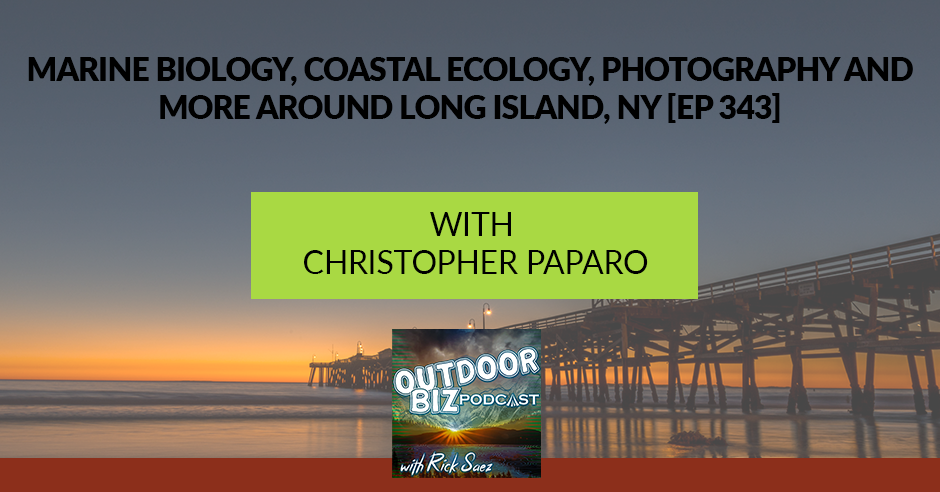 My dad took me fishing when I was five or six years old. It was something that he was looking to do with me as a kid growing up. He was not a fisherman by any means,

we learned together. And I caught my first fish, which was a winter flounder. I was about six years old and I’ve been hooked on fish ever since.

How did become a Photographer?

That was . . . I don’t wanna say dumb luck, but when I was in college I had an opportunity to go on a winter session Tropical Marine Bio course. It was four weeks in the South Pacific, Two weeks in Fiji, and two weeks in the Solomon Islands. And before I left, my parents gave me a camera. Or, you know, bought me a camera for my birthday. Saying, Hey, you’re going someplace really cool, you really need a camera. And at the time it was film. So I remember going to Costco and stocking up on rolls of film so I would have plenty of film and I just I winged it as I went.

– So you’re self-taught at a handful of things. That’s interesting that you just pick it up and run with it.

I have a BS in Marine Science from Long Island University at South Hampton, but I’ll be perfectly honest with you. I hated school. While I was in school, I was working full-time in the field while I was going to school. Cause I just wanted to be a Marine Biologist. But I wanted to skip the school part of it, cuz I was never good at taking tests. I was never good at comprehending all that kind of stuff. So I just wanted to work and that’s just how everything has rolled with me. I’ve just taught myself quite a bit of things. Like you said, with the photography, you know, and then a lot of the knowledge I’ve acquired over the years is self-taught.

Then I go and look ’em up, but you know, I was never good with that whole school stuff.

– How did you fall in love with Marine Biology?

Growing up on Long Island in the early eighties, as a kid there wasn’t social media, there wasn’t the internet and stuff. So really, it was just local news. And any time there was something Marine-related, whether it was a whale washing up or some sort of fish, whatever, it was always scientists from the Long Island University, Southampton College there. And so that kind of was like, Whoa. That’s right here in my own backyard. I begrudgingly went to school. Still, again, I wasn’t thrilled about it, but I was excited like, oh man Marine Science, I’m gonna go to school for Marine Science.

There’s never a typical day for me at all. And it keeps you on your toes, right? It keeps you excited. So the lab is a 10 million research lab and I work with researchers that study everything from harmful algae blooms, like the brown tide, the red tide, all the way up to Whales and everything in between. So I assist them in a lot of research. I don’t know always necessarily know every piece of information they’re working on, but I know enough to help them maybe find their specimens, set up the experiment, work through things that maybe problems they’re having with.

I’m also part of the Southfork Natural History Museum shark research team. So me and my colleagues and I, we tag sharks in the New York bite area. So that’s pretty much from Cape May New Jersey to Montauk Point. And we satellite tag em an acoustic tag em, and we’re trying to just get a better idea how sharks use our local waters. And we’ve been doing that since 2015. So now that anytime something Sharky comes up, like recently we’ve had a lot of shark sightings and unfortunate, a couple bites the phones blow up and everybody wants to know what’s going on.

– How did you grow your Writing and Photography?

While I was at the aquarium, a good friend of mine, Todd Gardner kind of pushed me and said, “Hey, you’re taking care of exhibits that the home hobby aquarium people would love to learn about. Why don’t you write about it? And you can use your photos to promote the articles.” And I was like, no, I’m not doing that. I can’t write. And long story short, he mentored me and helped me write my first article. I look back at it today and it makes me cringe. But I got it published and you know, my photography is what really helped me get it published.

And since then I’ve been published about 160 times both local and national and so it’s just come about. And as you know, I’ve had great mentors along the way that have helped me, organizations like OWAA a and the New York State Outdoor Writers Association, you know, it’s been great.

– Do you have any suggestions and/or advice for folks wanting to get into Journalism, Photography, or Marine biology?

With all of these, I think you gotta do it. Like Marine biology, All my guidance counselors growing up, my teachers, all told me I was making a complete mistake going into Marine science. I got no support from school counselors, things like that. They all told me there are no jobs. The few jobs there are paid nothing and they’re not wrong. There weren’t many jobs and they sure don’t pay good. That’s why I do all this other fish guy stuff that I do. But I would not be happy in a cubicle. I would not be happy somewhere else. So my parents were very supportive. Hey, you do what you wanna do, what’s gonna make you happy, cuz you know, you’re gonna have to work the rest of your life. So you might as well be happy doing it.

So with that advice, I did it. I put my nose to it and you know, I went to school, which I, again, I didn’t want to, but I went to school, but as soon as I got to school, I was knocking on the internship office store. And they’re like, you’re a freshman. You can’t, but I want an internship. And I just kept pushing and pushing. And they got me one, they helped me get an internship my freshman year. And I ended up doing I did three internships while I was in school, I then volunteered for what was a rescue center back in the day here on the island. So I just did it, you know, I got a lot of experience.

I tell a lot of students that I work with today, you know, if you want it bad enough, you gotta make the sacrifices to get there, you know, and you can’t let anybody tell you what else to do. And you just gotta do it. You know, and sometimes those sacrifices are working two jobs.

– What is your favorite outdoor gear purchase under $100

Recently my new favorite toy, which I was not expecting was a dome port for my GoPro. GoPros are great. I use ’em a lot. Especially with the shark stuff, it allows me to not get in the water while we’re fishing and all that kind of stuff.

– How about some of your favorite books?

I’ll be honest with you, I don’t get much time to read. My favorite books, honestly, that it’s, I don’t know if you really consider a book, but would be field guides. I’m still old school to a point where I like flipping through pages to see trying to key out a bird or a fish or something that I’ve come across. So I’m looking at my desk now and there are five or six books on it and they’re all field guides. You know, some of them are old. Some of them are ones that I remember my grandmother bought me when I was a little kid.