Imagine a world in which women no longer doubted themselves. a world in which you believed anything was possible and that there were no fears or glass ceilings holding you back? Sensi Graves loves helping women do badass things. 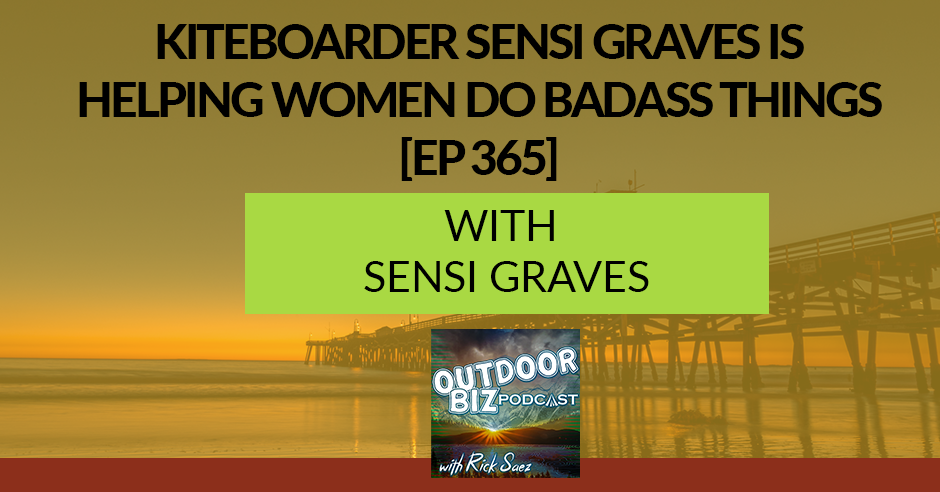 Brought to you by

I grew up on 80 acres and my mom was an avid skier. After she graduated high school, she lived in Utah for a number of years. My Mon and my Dad were ski bums out there, and I’ve always lived an outdoor life. We weren’t allowed to watch TV growing up. I have three brothers and we were always playing outside, always playing games, and thankfully we were taken on ski trips and wakeboarding trips and a lot of outdoor time growing up, and so it’s been a part of my blood forever.

How’d you get into kiteboarding?

Kind of a roundabout story. Actually, my mom died when I was 16 and after that my dad, was looking for things to fill that void and he, one summer when I was 18 years old, said, we’re going to learn to Kiteboard. And I was like, what? I’ve never even heard of this before. And he was having us watch some videos and I was like, what? What are we doing? I don’t even what you’re talking about, but he took my three brothers and me out to North Carolina to a place called Rio Water Sports, which at that time and still is the premier kit board school in the US. And we took a week’s worth of lessons. I fell in love with it and actually ended up going back there to coach a few years later as a kite board instructor when I was a junior in college.

Tell our listeners about professional kiteboarding competitions and how they work.

To give listeners a picture, you are essentially wakeboarding but driving your own boat. So you have a harness on your waist, you have 20 meters of lines, and then you have a kite, basically like a big piece of fabric, essentially with an inflatable leading edge. that is pulling you across the water and you’re using that kite to generate power with the wind, utilizing the wind to pull you across the water, essentially. So it’s like the combination of sailing and wakeboarding. You’re doing sailing tacks back and forth. You’re utilizing the wind just like sails do.

And so there are a variety of disciplines within kiteboarding. You have racing just like sailboat racing. You have big jump disciplines, kind of the thing kiteboarding is known for the most and the awe factor is when people go really high in the sky. But it actually takes a lot of skill to jump really high, and so that’s another discipline. Then there’s freestyle, which is doing tricks in the air, kind of like behind what you would see behind a wakeboarding boat. Back rolls and front rolls and tantrums and various things. And then the discipline that I competed in was park riding. And so that is much like on the snow. You have rails and boxes and things, we have those same features floating in the water.

You just recently launched a swimmer brand in 2012. What inspired that?

I launched that before I became a pro kiteboarder. I launched that when I was coaching kiteboarding. I was in the water every single day, and I quickly grew tired of the swimwear that was on the market because it was really either, one of two categories, really fashion-forward, but didn’t say put, or really performance-oriented but wasn’t beautiful to wear. So I just had this idea to make something that was that combination of both. I had no experience and no business background, no design background, and no manufacturing background. I was 23 and it was, I mean, an immense learning curve.

And how’s it going?

It’s super competitive. The swimwear market’s extremely saturated. I believe that a lot of business is innovation, perseverance, and luck as well. Establishing myself as a kite boarder and growing my personal brand, the swimwear company grew simultaneously. So we were the first kiteboarding-specific swimwear brand, and that really enabled us to get a bit of a foothold in the market. We really have an established group that we cater to. And, for us, it’s just about keeping consistent, always improving the product, but keeping consistent messaging. Our whole mission is empowering women in sports, and in the outdoors, and helping women feel good in their bodies so they can do what we all wanna do, which I believe is move with ease in the world and have as much fun as possible exploring this beautiful planet.

Is it sold online only or also in shops?

We have swim shops as well, kind of all over the place. It’s predominantly through our e-commerce site though, sensigravesswim.com.

You’re also a woman’s empowerment speaker. What type of speaking engagements have you done?

This is something that I’ve started doing over the last two years. A kick in the butt from the pandemic when, at the beginning, I was like, ah, is anyone gonna buy swimwear? What am I gonna do? And I’ve always had this desire to teach.

I taught kiteboarding for a long time. I still put on women’s kite camps and retreats. I still lead and facilitate groups, and I knew that a lot of people looked at me and said, wow, you have an amazing shiny life. You’re a pro kiteboarder, you have your own swimmer line. It looks super badass on the outside. But as we all know on the inside, you’re like, wait a second, I’m not enough, why don’t I feel badass? And so the more I spoke to that on my social media, , um, the more people really resonated with it and the more I was like, gosh, this message, I not only wanna serve women, but all humans in helping people that look successful on the outside, feel successful on the inside.

And so what I speak on a lot is confidence, and feeling worthy in who you are and what you’re doing, because I believe that it’s only from that place of internal worthiness that we can go out and shine in our light and actually make an impact on the world. So, I speak to anyone that will have me, but in, terms of niching down people that are looking to overcome imposter syndrome. So people in business and, I’ve spoken to a couple of real estate agent groups, people in the outdoors,  and then, young girls. Women and young women that are dealing with a lot of social media. it’s. Extremely difficult for high school students.

Do you have any suggestions or advice for anybody wanting to get into kiteboarding?

Yeah, definitely, for sure to take a lesson. If you can find a school that’s near you. If you’re around any sort of body of water, just google kiteboarding in your area or take a trip to a kite school if you have a little bit of disposable income to spend on that. But you’ll wanna make friends with a Kiteboarding school and just learn about the sport. I would say start watching some videos to get comfortable with the terminology, cuz there’s so much that when you get right in and you’re like, wait, what? People are telling you this and you have to figure out this. So just start to spend time getting immersed. . And then if you really wanna come in, I would say buy a trainer kite and start practicing flying the trainer kit. That’s something you can do by yourself without an instructor. And it is really good to learn how the kite flies, and then you can take a lesson from there.

Do you have a favorite piece of outdoor gear that costs under a hundred dollars?

Yes, I actually do, it is by this company called Vessel. V S S S L. They have this small coffee grinder, so it’s a little portable coffee grinder. We actually took it on our road trip down to Toto Santos last year. My husband and I and a couple of our friends were in a caravan down to our wedding. And we used that little thing every day for grinding up our beans and it’s just a cool piece of technology.

Do you have any favorite books?

I read a ton. I’m a pretty voracious reader. I have a, my favorite book list.

How to do the Work by Dr. Nicole LePera

You Are a Badass by Jen Sincero