Welcome to episode 357 of the Outdoor Biz Podcast and my conversation with Adam Ruggiero from Gear Junkie. We wander all over the place . . . from how he got connected with Gear Junkie to the piece of gear he feels we haven’t quite gotten dialed in yet. Brought to you this month by The Running Event. 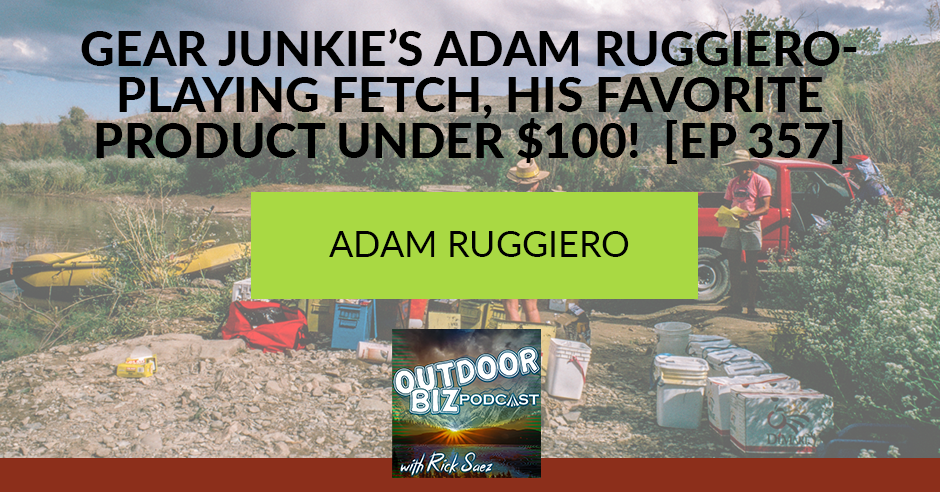 Brought to you this month by The Running Event

Register for Switchback at The Running Event

Secure your spot at Switchback at TRE this November 29 to December 1 in Austin, TX! Access nearly 300 exhibiting run and outdoor specialty brands, actionable education, and valuable networking at an exclusive discounted rate with code OUTDOORBIZTRE. Use this link to register: https://xpressreg.net/register/trec1222/landing.php?sc=OUTDOORBIZTRE. To learn more about Switchback at TRE, visit this page.

Adam’s Intro to the Outdoors

I grew up in a time where, I mean, it’s fundamentally different now, but I would just leave the house as a seven-year-old kid and walk down the railroad. Like, I would just go, not with anybody. I was an only child and there were no cell phones. There was certainly no way for me to get in touch with anybody if I needed to. It was just this knowledge that I’d go outside, you know, sometimes in nature, sometimes just around the city.

How he got into writing

I went to college, I was in my first year in Miami, Florida and I was gonna be a marine biologist and everything was on track, man. I was gonna be a marine biologist. And it’s September, and 911 happens AND It’s my first time away from home. I mean, with the exception of everybody else at the school, I have no family and I’ve only barely scratched the surface of making new friends. And anybody who lived through that time, everything was shaken. Oh yeah. It was like everybody was sleepwalking. Because from September 11th to September 12th, one day has happened, right? You’ve gone from Tuesday to Wednesday. But from Tuesday to Wednesday, that has happened countless times before.

It was like making conversation with people was more difficult. You didn’t know, you know, do I need to go to class? Should I not go to class? Do we talk about it or do we not talk about it? I mean, it was, and there wasn’t really a fully developed internet to the extent that there were answers every second. You know, there wasn’t Reddit and Google News. It was like we were still sort of waiting for answers or whatever to happen. And in that time, one of my first semester classes was a creative writing class, and I don’t know, dude, like I, I just started. Typing stuff. I typed what I was thinking about. I typed introspection on how different the world suddenly seemed, all this stuff. None of which is really fit for any other human being to read, but it was like this outlet that I kind of naturally sought out to sort out what was going on in my head. And I think ever since then, I’ve just slowly developed that voice.

Gear we have too much of

Yeah, it’s on Amazon. It’s probably at Menards and Home Depot. It’s 20 bucks. Get a pair of welding gloves. If you’ve ever been around a campfire and the fire starts to die out and somebody starts poking at it with a stick. Dude, I bring these on every trip and every time I do, people look at me like I’m an idiot. Like I’ve got three heads. And as soon as that fire starts dying down and I put these welding MITs on and you start moving these hot coals. You reach right into it. Reach right into the fire man!

Driving with the Devil