Have you wanted to sing the Russian national anthem . . . with an army general in a brothel bar in Yemen? Or get chased by pirates off the coast of Africa? This week on episode 338 Patrick Schulte of Wanderer Financial shares those stories and how he and his family live the wanderer life traveling the world! 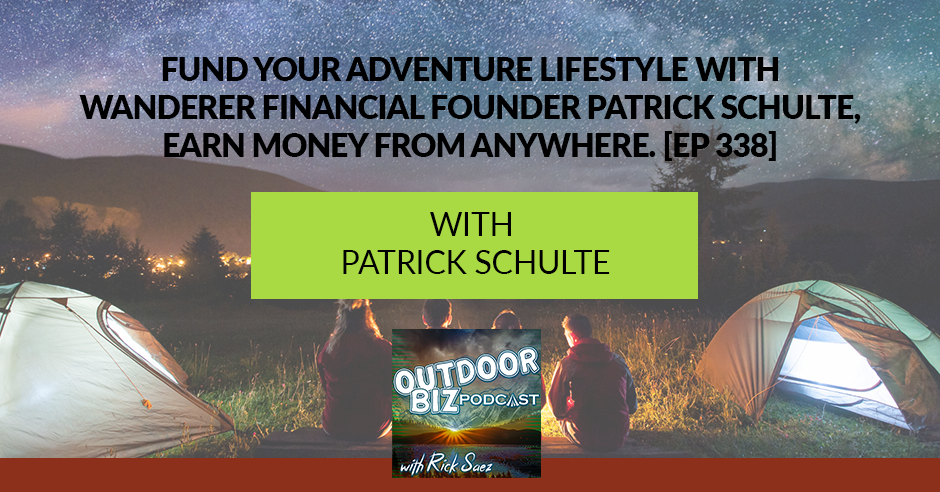 visit ricksaezdotcomslashteepublic and find something to add to your tee collection today, I know you have one.

Go to https://ricksaez.com/teepublic and show your love for the show with one of our new Outdoor Biz Tees below.

What inspired you and your wife to travel?

For us, it just popped up. We were living a pretty normal, pretty straightforward life in Chicago. And then I was just, I was inspired early to sail around the world by strangely enough, by seeing stories of like teenagers. They were all backpacking around Southeast Asia. I was reading these stories. I would come home in the afternoons from my job. And I’d come home in the afternoon, I’d get online.

And I found this website BootsnAll, and this was, oh, cool. This was a long time ago. This would’ve been about 2000. And so I was back, you know, back then there was like, there was hardly any pictures. People were just posting these little two-paragraph tidbits of some adventure that they were having, you know, and it was, I don’t know, it just struck me one day.

Here are these young kids probably also ’em were probably just doing their year after high school kind of trip, you know, but they were going, you know, to all these far-flung places and having these crazy adventures and they were doing it like with no money you know, just doing these things.

And here I was 10 years older by now and I, I had plenty of money, but just didn’t have any adventures, you know, under my belt, I hadn’t really been anywhere or done. You know, and I just, it just struck both me and my wife at the same time that we, it was, we needed to do something, you know, we need to get out and see the world and have some adventures.

What mode of travel are you using these days?

We’re back to boats now. I should say we’re in a transition period here between our third and our fourth boat, actually. So we tend to go through these periods or they tend to last three or four years. We go from boat life and then we decide, oh, Hey, let’s go do some land travel for a while. And so we’ll switch to motor homes. Or BW bus back in the day before kids or, you know, and then we go back to boats again and it’s turned into a bit of a cycle with us, but this time we’re actually going from boat to boat again.

How’d you get into stock trading?

I always knew I wanted to be a trader. That was a weird thing. I know most people go off to college and they figure out what they want to do. But when I was about 16, I remember specifically seeing on the nightly news back then, you know, back when there were like four channels, I’m dating myself, but back then you had the nightly news and then for about a one minute segment each night, they would recap the day’s events in the stock market. And you’d always see these guys down on the New York Stock Exchange. Yelling and waving their arms and, you know, it just looked really exciting. And I thought, man, you know, I don’t know.

I was always good with numbers. I was a really good math student and I just, I don’t know, it just struck me like early on and that’s for me. And yeah, so I went off to college and got a finance degree and an economics degree. And then I just took outta college. I took literally the most basic entry-level job possible at the Minneapolis Grain Exchange, which is just this tiny little, just tiny little exchange in, you know, in Minneapolis that traded spring weed future.

But it was just a foot in the door, you know, it got me going.

And when did you start your blog Bumfuzzle?

We started Bumfuzzle back in 2003, literally, when we took off to go sailing, we, again, this was like early days, but that sort of thing. So it just wasn’t much out there as far as the travel blog and that sort of thing. And there certainly was no YouTube or any of that. You know, so it was early days. So I was like, I still had to teach myself how to make a website, literally code this little website. And it was just to share with family, the place to post pictures and let our family see what we were doing. And over time it just grew and grew. And now it’s a big community. It’s a lot of people. It’s really a lot of fun and it’s great for us to look back on and to have that my wife and I just constantly looking at the website and reminiscing about something or, you know, whenever something comes up and we’re like, where was that that we did such and such. And we can actually go look at it and remember it.

You sang the Russian National Anthem with an army general in a brothel bar in Yemen. What was that like?

We had arrived in Yemen. You know sailing around the world and Yemen is supposed to be a dry country. So here we are, we’re anchored in here. And we spotted this grungy bar at the edge of the port. And this was, it’s a filthy port. It’s the port of Aden. I think just a couple of years earlier, a US ship had been bombed. It was an intense place, right?

We were young and we didn’t, we were carefree. We just went for everything and had fun. So yeah, we saw it as a bar, we’d go in there and every head in the place turns and looks at us and it always reminds me now thinking back of it, it’s like the star wars bar scene, It’s just like alien creatures, so by the end of the night, we’re just singing the Russian National Anthem. This guy, this Yemeni general, who’s wearing his uniform, meanwhile, he’s got his arm around a girl, you know, a girl of the night, let’s put it that way. And the whole bar is just complete madness. And I bet not even supposed to be drinking according to all the rules of the other religions and whatnot. We kind of joke about that a little bit, because even though it really was Pirate territory, sailing between Oman and Yemen, especially was an area they called pirate alley.

How you’ve afforded to travel the world full time for 20 years. You must be leveraging your trading, and finance background.

The whole time was just sailing around the world. Then we’d get back and we’d fly off back to Chicago and just go right back to doing what we did. But we were maybe two years into it when we were like, yeah, no, we’re not going back. There’s too much world to see.

So a couple more years in, and then pretty soon it was like, okay we’re gonna have to start thinking about how to make some money again. And by this time, fortunately, trading had mostly gone online. So it became a lot easier. All of a sudden I could do some of the things that I had done before, the same kind of trading, but I could just do it from a computer anywhere. So yeah, we spent quite a few years where I would trade just a little bit here and there whenever we stopped somewhere and had good internet and we’re planning on spending a few days there. And then I would have time and look through opportunities and, you know, try to make a little money. And was able, usually able to do that. And then we would just continue on with whatever we were doing.

Then after a few years, that just grew, people started to see our lifestyle, on our website. And they just started asking how are you doing this so many years now?

So then I wrote a book and then that just led to more questions about it and. Just gradually started offering to teach people how to trade options at. And I was just shocked by how many people were interested. And so gradually through the years, I morphed into my current business, which is Wander Financial.

Do you have any suggestions or advice for folks wanting to travel the world?

I try to remind people that, that nothing has to be forever. Like I think what people think of traveling world they spend some time like going if I worked for another seven years, then I could retire and then I could do it. I could, travel the world forever or something. And I like to encourage people like, man, just do it like as quickly as you can, get out there. And if it’s only for a year or two years or whatever it is, that’s great, then you’ll find a way to make it. You’ll just find a way if it’s something that like you’ll figure it out, right? If you truly love it, you’ll keep going. That’s what happened for us here. We are all these years later, I think 20, 20 years now.

Reminiscences of a stock operator by Edwin Lefevre

Anybody interested in using the money they earn the hard way and putting that money to work in the markets in order to gain themselves a bit more time to enjoy the world and the outdoors, check us out at wandererfinancial.com.

Use coupon code OUTDOORBIZ10, and that’ll save you 10% on your subscription.