Dkota’s Rob Rosenblum tells us about their unwavering retailer support and commitment to premium and durable apparel. [EP 314]

Rick Saez
Dkota’s Rob Rosenblum tells us about their unwavering retailer support and commitment to premium and durable apparel. [EP 314]

I’m thrilled to speak with Dkota Partner and Chief Brand Officer Rob Rosenblum today. The independent explorer spirit is what sparked Dkota Grizzly’s passion to produce the heartland’s most premium and durable apparel. Rob and I talk about their products, commitment to retailers, and more in this wide-ranging conversation. 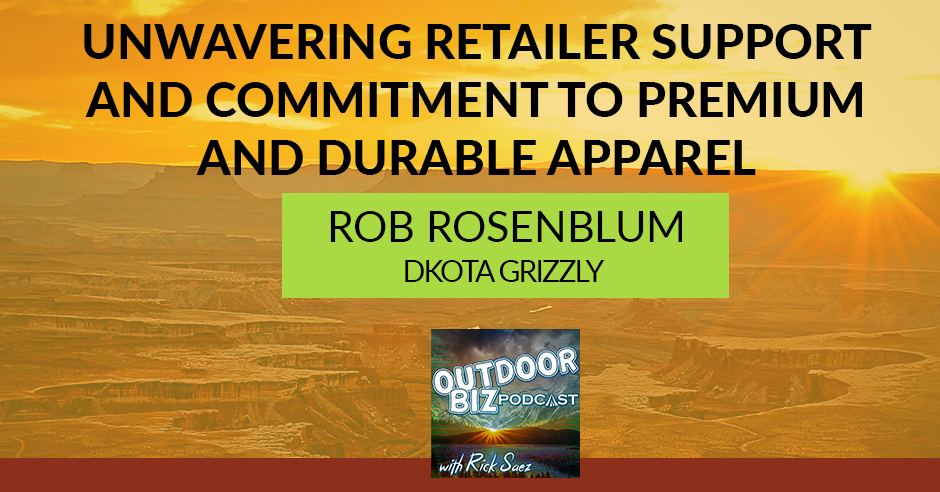 My family was a camping family, they really enjoyed it, other couples turn them onto it. And it’s a great economical way to get away with the kids. We had a sedan, we called it sedan camping. We had a Chevy Impala and put one of the old-style camping cargo top carriers on there. We had one of those big, old, octagonal canvas tents. They were heavy and they stunk the high heaven if they got wet. You had to set him up again to dry if you got caught in the rain, or you didn’t have a fly on it. And they always had that musty smell to them. But that’s how we started.

Then we got a wagon, one of the cool ones with the disappearing tailgates and we towed a StarCraft pop-up camper. We got tired of sleeping on the ground and we took that next step and we hauled that thing around.

One of our first big trips was a three-week trip out west, the first time I saw the Rockies. We did the whole Colorado grand canyon Arizona thing, and that was awesome. And then we did some other ones so that love of being outside and enjoying especially the Western US came from that trip.

Where did your entrepreneurial spirit come from?

I’ve always been entrepreneurial as a kid and I had different jobs, I created different things to do different little businesses. But when I got his business long before it was even Dakota. we were one of the largest mens and boys outerwear manufacturers in the United States. So I had to create change within the structure of the business. So I think I called it “entrepreneurial” actually. That’s how we evolve into different areas. And I think the combination of that is the transition into a full sportswear company and then a branded sportswear company with the Dakota.

Your about us page begins with “We weren’t born craftsmen, We were born explorers.” Tell us about that.

St. Louis, one of the things we’re known for is the gateway arch, which is the nickname, but it’s really the Jefferson National Expansion Memorial commemorating the Louisiana purchase. So right there on the banks of the Mississippi is where they assembled things. And then they pushed off from St. Charles, which is a small town, just where at the confluence of the Missouri and the Mississippi rivers. So yes, we reached into that heritage of the city and just thought hard about our connection to that and what it’s like just to be a Midwesterner. And those were the things that were meaningful to us. And we just thought, 200 years ago, craftsmanship was linked to survival.

If you were an Explorer, you had to be a craftsman, they had to have needle skills to make their clothing and their moccasins and repair things, leather skills to maintain saddles. They were hunters, cooks, medics, navigators, author veterinarians. That’s what Lewis that’s what Lewis and Clark were. So we took that as inspiration.

How did Dakota grizzly come to life?

It was grizzly actually at the very beginning. Going back to the mid-two thousands. A fellow on the west coast named Scott Nussbaum, who was very much a so-cal guy, lifeguarding was his passion. He’d previously been a swimmer and a surfer and lifeguarding out there, which is of course a big thing. And he was in the apparel business in another company, and then he decided just start Grizzly. It was men’s and women’s, very boutique. We ran into him at a show and we just struck up a conversation. I was taken by the vibe that he was getting going with this brand and he needed what we had, which is a much larger established company and we wanted a brand to incubate and nurture. So that’s how the relationship started. It was very much a Western us and West Coast brand first.

You mentioned the brand is transitioning to emphasize Dakota. Tell us a little about that.

Originally the brand was grizzly and you might be familiar with the basketball team, the Memphis Grizzlies. They didn’t like it too much when we started to do the rest of the legal work to protect this.

Obviously, we don’t make fan wear and it’s not exactly the same thing, but there’s not enough room in the world when somebody has enough lawyers. The brand had just started at that time.

We didn’t have a big marketing investment, Scott and I agreed that we had to do something and we were out at OR actually, where people bring their dogs and somebody had a beautiful lab named Dakota. And I said that’s it.

The latest transition was we wanted to emphasize that name, the expansive imagery of the west and of the Dakota country. We then decided to transition the name to Dakota just to have the imagery of the west and the expansiveness that name evokes. And we want it to be ours uniquely. People had gotten to love the brand and just call it by a shorthand, they would just say Cota. And that’s where that started. And I said, when you say Dakota, you don’t need the vowel. When you drop the vowel, it becomes a brand mark. And that’s what happened.

What outdoor activities do you participate in these days?

I’ve always been a runner, not as much lately. But that was my big personal pastime, running marathons. I got into triathlons a little bit, just a little bit late on that. Really grew to like trail running because it’s so much easier on your joints and I love it when they have the races in the fall.

One of the things I loved really is getting out on some of the float streams that we have in Missouri. We have something here called the Ozark National Scenic Riverway. It’s really a hidden treasure in Missouri. People here know about it, and it’s protected, federally protected confluence of spring-fed rivers. The Jacks Fork, The Eleven Point, and the Current. We would take multiple-day floats and some nice trout fishing. There’s even some trophy trout fishing there.

Do you have any advice for folks wanting to get into the outdoor adventure business?

I think the best ideas come from solving an overlooked problem, obviously an unserved need. It’s kinda tough to find. Sometimes people find it by accident. I think people who are outdoors a lot, who are thinking “so why doesn’t this thing work like that”? Or why doesn’t it have this feature or they get frustrated over something?

Yeti is a great example. It doesn’t always have to be that dramatic. but people who, use their gear out and ride it hard don’t like things to fail. And in many cases, if that solution creates value people are willing to pay for the utility.

This summer, we went to Vail. I hadn’t been there in the summer in a while just to do some hiking and enjoy some cool weather when it was hot here. And I’m big on hydration. So I went and when you run of course we would carry some things with us. We just had our little handgrip, water bottles. We’d fill them up. And of course, when you’re racing, you have stations, but I bought a Camelback and just the pretty basic one cause you’re just dry up there.

PrevPrevious EpisodeHR Outfitter: A team of HR professionals with the same values and outdoor mindset as you [EP 313]
Next EpisodeWANDRD Co-Founder Ryan Cope on growing up all over the world and launching a brand with Kickstarter [EP 315]Next