30-year glove manufacturing veteran Gary Schloss felt obliged and inspired to bring a protective glove to market and help offer a solution to contain the spread of COVID-19. Gary and his team delivered that solution in the Spring of 2020 and he’s here to tell us all about it. 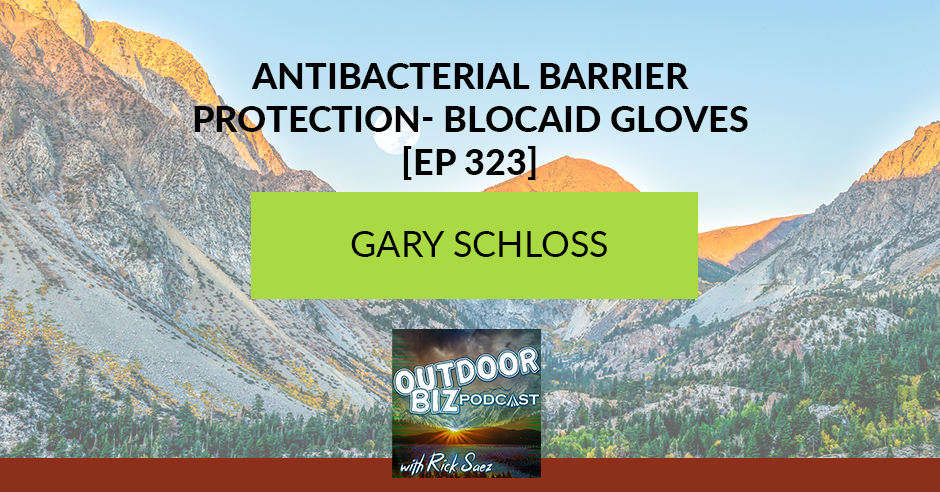 Do you love to read but don’t always have the time to sit down with a good book?

I’m the same, and sometimes I just feel like having someone else tell the story.

Audible is like having a library on your phone.

I think like many of us, my introduction to the outdoor and outdoor activity lifestyle was instilled in me by my father and my brother.

We grew up skiing, we started in the Poconos and in the Catskills and ended up migrating up to the bigger mountains of the Adirondacks. And then to Vermont, the Greens, the Whites, New Hampshire. Eventually got to get on planes and started skiing in the Rockies, the Sierras, and eventually over time made my way to the Alps. So we just grew up skiing and really enjoying a mountain lifestyle.

We’re a family business. My family was involved in the Aris ski glove line. At the time Aris was owned by consolidated foods and they were migrating from leather gloves. The market was migrating from leather gloves to Non-leather gloves with Gore-Tex inserts. They decided that they didn’t want to be in ski gloves any longer. So they offered my stepfather, Bob Terran the license to the Aris brand, which is when we co-founded TABAR in 1982, we were the licensee for the Aris ski glove brand. And then shortly thereafter migrated to a private label model.

BlocAid came about as we were entering the pandemic. We were going through a shipping a shortage of PPE, specifically PPE that wasn’t coming from China and Taiwan, because there were a lot of disturbances to the supply chain. You couldn’t get a lot of these products. And I was looking for a domestic solution to that problem.

So BlocAid came about by creating a partnership with a company called echoes and ink, where are our gloves are manufactured?

If worn and used properly our gloves will help to reduce and protect the wearer from surface to surface contaminants, germs, viruses, and things of that nature.

And it was an offset to latex gloves, which were disposable. As everyone can remember, were found in the corners of parking lots of grocery stores, and on the streets everywhere. After a time people weren’t using them properly, they weren’t putting them on and taking them off properly. There were a lot of issues with cross-contamination. There were a lot of issues of continued shortages. First responders who desperately needed that product couldn’t get it. So BlocAid came about to answer that call.

Some of Your Biggest Wins

.It’s a very wide-open market. The challenge for me has just been reaching the proper target audience effectively.

So we’ve done a number of things. We created product videos. We’ve created social media content. We placed ads on Facebook and all different ads up on YouTube. We’ve tried to utilize all of these new tools to reach consumers directly. The medical institutional channel probably is the most viable. It’s just been different. Mainly because no one has been in offices to meet as groups, and decide on how to impact change within their organizations, to onboard new products. So some of the larger medical firms that we had been talking to, we’re only meeting maybe once a month because everyone was working remotely. It’s been quite an interesting ride, this pandemic has shown us a new side to almost all aspects of our lives.

Give us your perspective on COVID

Just as of yesterday, my grandchildren didn’t have to wear a mask to school, think about that. For the better part of two years, these kids have been wearing masks everywhere. In the state of Connecticut, you no longer needed to wear a mask. So it’s a liberating day. All these parents are taking pictures with their kids on the school bus with no masks on and celebrating like it’s independence day.

Not only has it changed that, but it’s changed a multitude of tasks. How we shop, where we go to malls, shop online, it’s changed so many facets of our daily lives that this has been one of those tipping point moments, a paradigm shift, so to speak for so many different levers that we push and pull on every day.

I still ski and snowboard. I’m almost 60, so snowboarding is actually my preferred method of sliding on snow. A little easier on the knees over the years. But when I’m with the little ones I’m usually skiing. Guiding them and teaching them. It’s easier to pick a kid up and get them on a chairlift when you’re on two boards instead of one. But I’m also very active outdoors, a lot of hiking boating, and on a motorcycle. I’m a huge motorcycle enthusiast. So we do a lot of motorcycle touring and try to get out into the outdoors as often as we can. And we live in a beautiful spot. We’re not as close to big mountains as I’d like to be but we do have a few local Hills which allow us easy access and I live on one of the prettiest lakes in the Northeast. So I really can’t complain.

I would recommend to anyone looking to get into the outdoor business, to just stay local and, or stay small, start at one of these entrepreneurial brands that aren’t one of the big, huge monsters, because typically you’ll wear many hats.

You’ll go into your role. And small companies that are potentially stretched for resources, tend to teach a lot of much with a much broader brush than say a large-scale Corp corporation in a major city where you can usually get siloed into doing one thing and handling that one thing at a time.

And again, until perhaps you get a promotion and then you do another thing. What I like about staying local is that brands typically tend to be. Owned and operated by people who are still very passionate. They’re very product-focused versus price and profit-focused. And you’ll get a better sense of where you’ll get a better work-life balance. I think people working hard are working hard, but I also think working hard with less stress is probably a good ticket to enjoying yourself.

I think two come to mind. The initial one being a Leatherman skeletool found what it means. I think it was one of my swag runs at an outdoor retailer show. Perhaps I picked up a little Leatherman Skeletool and find that thing invaluable.

It like sits in my pickup truck and I’ve used it numerous amounts of times and for the most outrageous and weird things. And the second there’s another one though. It’s called a Molle Zinger that’s specifically made to go on Yeti coolers. So you can attach a bottle opener to it. And you could use that same instrument on a backpack and you could use it for fly fishing tools. You could use it for just about anything. It’s just a great little lanyard that pulls out when you need it.

There are two, what I want is called The Shackleton Way. It’s basically business leadership lessons that stemmed from The Endurance and that great Arctic exploration that, that failed. Spectacularly in, in many ways. One of the greatest failures of all time then on the back too, though, that’s the key? The reason why it’s the greatest is that Shackleton is a proven leader.

Quite the man, he got 27 people who were stranded on the ice in Antarctica and the Weddell sea safely back to civilization to their loved ones. And it was, it’s an interesting read because it talks about the actual expedition and what went down and some of the heroic and almost human aspects of their trials and tribulations, but then breaking them back down into

Useful lessons for running a company. The second book is by Yvon Chouinard and Let My People Go Surfing. Always respected Patagonia worked with them as a brand for many years in Ventura. 20 years ago. They were starting out with childcare on-site and they developed 1% for the planet they’ve always been a great product integrity company and doing what’s right for the product, not just profit.

And then also taking some of those profits as they grew to the huge company they became and plowing them back into environmental awareness and. Yeah, quite an interesting book, a little bit of a biography on Yvonne himself, a little bit of biography on the company, but also some great lessons on how to create a culture where everyone feels empowered.