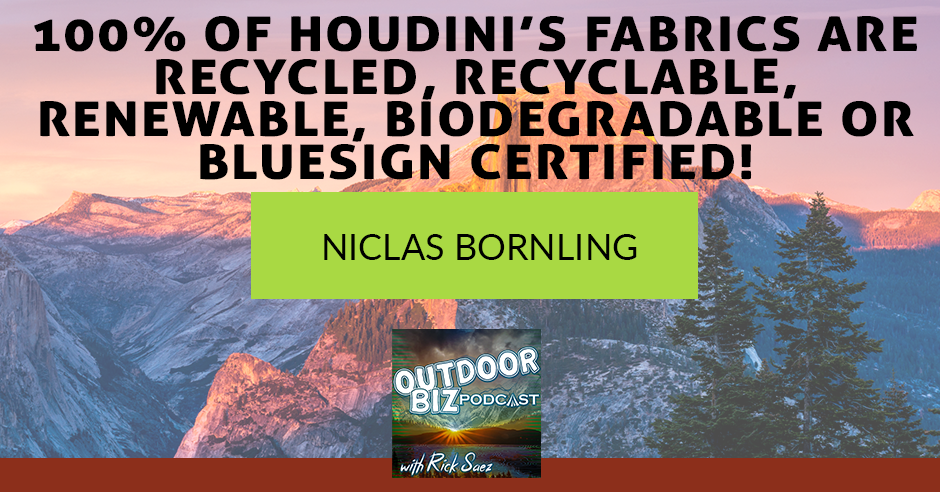 Today on episode 348 of The Outdoor Biz Podcast Houdini Sportswear Head of Brand Engagement & DTC Sales Niclas Bornling tells us how an odd band of scientists, artists, designers, and adventurers, are pushing the boundaries of how outdoor clothing is made.

Brought to you this month by Grammarly

How did you get into the outdoors?

I actually grew up sailing a bunch, which is, kind of what you do in Gothenberg. We’ve got the archipelago, we’ve got the Atlantic ocean coming in. And so that’s what I did in, in the summertime.

And in, in wintertime, I was skiing. Like most other Swedes, lots of Swedes go cross-country skiing. My thing was more downhill skiing. And, I got into that through my dad. So it was a bunch of skiing, bunch, a bunch of sailing and all that kind of stuff.

I slipped on another piece of luck. Somebody called me up and had my resume lying around and some head hunters desk or something and said like would you be interested in a marketing position for a company called Solomon? And I was like, are you kidding me? So a job like that exists?  Dream Job! Hello. I’d been skiing and snowboarding for my whole life and obviously, I knew everything and I went to an interview met the leadership for Solomon Sweden locally. And, I just loved it and they called me up the same afternoon. I was like, that was fun, wasn’t it? I’m like, yeah, that was really fun. Okay. So do you want the job? Let’s go. Wow. So I got the job and I started out as a marketing manager at Solomon locally in Sweden.

Tell us about Houdini

There is a lot of history to Houdini actually. As an enterprise, it’s been around for quite a while. It started in the mid-nineties in Sweden. It has sort of a two-pronged history that has the first period of time with a female founder. Who’s a mountain guide who created a company where she made products that didn’t exist in the marketplace specifically for, women who were mountaineering and climbing . . . stuff like that. But the company basically went bankrupt and disappeared.

And then at the beginning of 2000, it was reawakened again by, another two women, Eva Karlsson and Hannah. And together they resurrected the brand and put a very specific twist on it, which is to be a leader in the sustainability space, in the apparel world. Not just limited to outdoor apparel, but to the textile industry in general. This very visionary, no compromise, hardworking woman who have created what is the modern-day version of Houdini and has done that for the last 20 years.

Your website says you are an odd band of scientists, artists, designers, and adventurers, is that “odd personalities” or odd in that you’re pushing the boundaries of how outdoor clothing is made?

I think that the whole idea of an odd band is that we’re, we’re not an average outdoor brand. And quite frankly, I don’t think we even look at ourselves as an outdoor brand because it is too limiting already there. And odd in the sense that, whether you are a climber or a chef or a mom and dad commuting by bike, it doesn’t matter. Right. we make apparel that you can use for every aspect of your life. And. So we’re, we’re quite different in that sense.

It’s gotta be a huge challenge also in the quest to recycle and rent and repair and reuse. which, which of those is the most challenging?

It all has its challenges. obviously right. There aren’t many systems set up to conduct business in a different way than take, make and sell. So anything that you introduce right now or, or have been, that is a new business model is gonna be challenging. However, I think that the most challenging of them all is gonna be a rental. This is funny because a rental for skis and snowboards and stuff like that seems to be the norm, right? But rental for a $600, shell, three-layer shell jacket does not seem to be part of anybody’s expectations. And whereas it should be because, how often do you actually use. $600 shell jacket that’s made for skiing. It’s rare. So we should be more interested in renting. so we introduced it as a pilot product since a couple of years back. It’s limited to Sweden at this time and we’re learning from it. but it’s challenging because it’s about changing people’s behavior.

Do you have any suggestions or advice for folks looking to get into the outdoor biz?

Yeah. I mean, at the end of the day, you just gotta bang down doors, right? The thing is we all get pinged on LinkedIn, and sometimes, you may get an answer you may not, but do not stop. That’s the whole thing, like, don’t give up. If you wanna work for Houdini, keep sending me LinkedIn messages, tell me why, and show me your passion. I’ll probably make the time to have a call with you eventually.

What’s your favorite outdoor gear purchase under one hundred dollars?

Under a hundred dollars. that would be nothing. But I mean, the reason why I’m saying that is because I don’t, I mean, of course, you’re gonna need some gear that is not gonna be super expensive, but I mean, if you look at what we offer, we don’t have very many things below a hundred dollars.

And that’s just because if you buy stuff that is that cheap, I’m not sure how long it’s gonna last. And I’m not sure how good it is for this planet if it’s cheap. I mean, the outdoor industry needs to avoid, ever getting anywhere close to what has happened to fast fashion. Right? Overall, we need to be a counterweight to that. We need to offer other solutions in other ways. But I can guarantee you if you go out and buy a $200, mid-layer, that will last you, a hundred times longer lifetime. So, yeah, that, that’d be my answer

How about some of your favorite books?

The Old Man and The Sea by Ernest Hemmingway

Before you go on and, and make this purchase, ask yourself these questions:

does this product deserve existence?

do I really have a need?

will it last long enough?

is it versatile enough?

will it age with beauty?

and nothing’s been added that isn’t needed, right?

is it easy to repair?

And, for us, this is probably specific to us, but is this durable enough that it could be in rental?

and lastly, does it have an end-of-life solution to it?

Does the company that makes this product give you, an idea of what to do with it when you’ve used it enough?

PrevPrevious EpisodeErem Boots founder Noah Swartz is making products using only materials with proven paths back to nature [EP 347]
Next EpisodeDuck’s Unlimited Communications Specialist Jennifer Kross tells us how and why they do all their great conservation work. [EP 349]Next